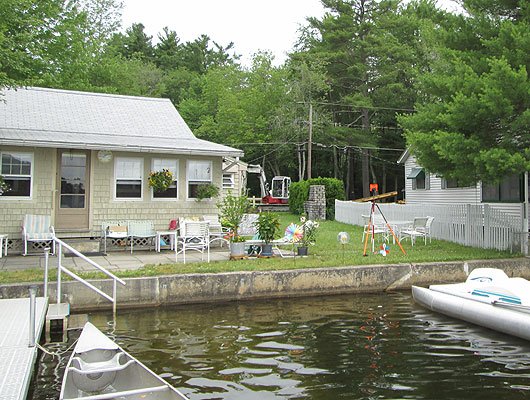 The Darby family home on a small lakefront property in Hampstead, New Hampshire needed a new septic system for lake property out of critical necessity. Their home on Edgewater Lane is in a waterfront area neighborhood that was formerly swampland before it was filled in and subdivided in the 1920s. Thus, the home’s only septic service was the original, outdated and now-failing cesspool. 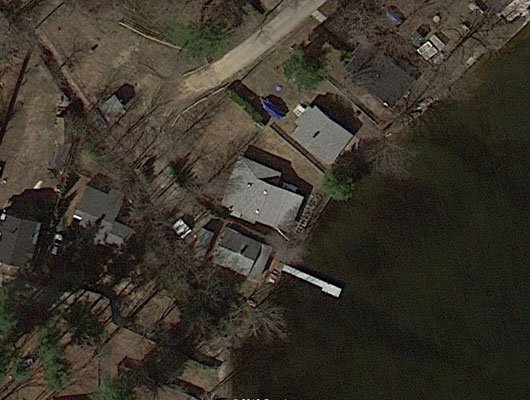 Aerial photo of the small waterfront lot with the innovative septic system.

When the one-story cottage-style home was built in 1927, the cesspool was located in the backyard. However, the people who previously owned it had built a series of additions that resulted in positioning the cesspool below the cottage. Because the cesspool was constructed in the water table, it had technically been in a state of failure for years, unbeknownst to the Darby family.

People noticed strong odors coming from underneath the cottage in the summer of 2013. It was removed from service when further exploration revealed the cesspool’s condition.  Questions were asked, information was gathered, and the answer was an innovative septic system design.

The Darby family sought the expertise of full service team of professional designers at NH-based Geometres Blue Hills, LLC –(603-749-4000) a firm specializing in land surveys, land use consulting, septic system design, and environmental consulting.  The design team assessed the customers’ information and situation, and specified a viable septic solution with visual appeal and long-term value for the small lakefront property.

The approval and installation processes for this septic system for lake property were filled with challenges. However, the team at Geometres Blue Hills, LLC did meticulous planning, and the team at A.J. Foss, Inc. manufactured and installed a quality Norweco septic system.  Coupled with the meticulous excavation work performed by G.E.Merrill and Son Excavating, this success story unfolds to include the major milestones detailed below.

Testing for Viability of Installation

To determine the viability of installing a new septic system, these factors were taken into account before a test pit was dug:

The test pit was then dug with the lake at its full elevation, and percolation testing determined an acceptable flow for system installation. 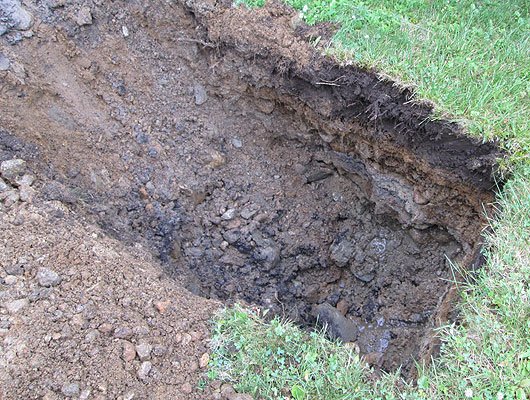 A test pit was dug to determine the viability of the installation.

Determining the Type of Septic System to Install

Many of the neighboring waterfront cottages were serviced by holding tanks – which were a better option for the Darbys than leaving the cesspool in service. However, when the Darbys considered the long-term financial implications such as the cost of constant tank-pumping, as well as the septic system’s impact to the property’s resale value, they decided that the ideal alternative was a stone and pipe leachfield with the Norweco Singulair septic system.

Consultations with the Town of Hampstead’s Code Enforcement Officer and officials from the New Hampshire Department of Environmental Services (DES) prompted the designer to seek several key waivers from the town and state, to enable installation of a conventional stone and pipe leachfield in the property’s small waterfront footprint.

To ensure compliance with the Shoreland Water Quality Protection Act (SWQPA), a proposed septic design plan must be approved by the New Hampshire DES before the design is completed. One example of the Act’s limitations involves the calculation of area that may be disturbed by heavy machinery. The Norweco Singulair system enabled this project to comply with the Shoreland Protection Act, since the Norweco system’s leachfield requires 75 percent less area than a conventional leachfield, making it ideally suited for small-lot waterfront properties. 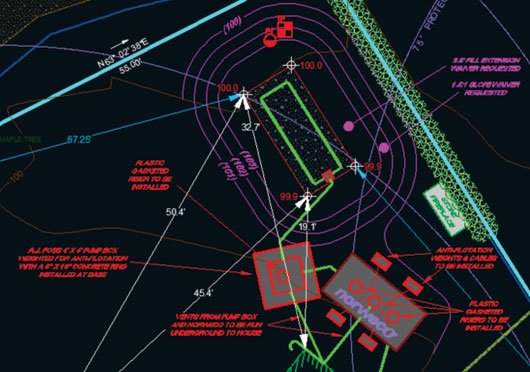 Overview of the Norweco Singulair septic treatment system, successfully sited with a small stone and pipe leachfield on the Darby’s lakefront property

Designing the Norweco Singulair septic system with a stone and pipe leachfield involved these key steps:

Calculating the Leachfield Size
Because the Norweco Singulair system is granted a waiver by the DES that enables a 75% leachfield size-reduction, the septic system designer calculated the Darby project’s leachfield size as follows:

Determining Hydraulic Mounding
Once the leachfield size was determined, the septic system designer calculated its vertical placement. Another advantage of the Norweco system is the waiver it earns in the form of a valuable soil credit, enabling placement of the leachfield only two feet from the water table, instead of the typical four-foot setback distance required by a traditional leachfield. 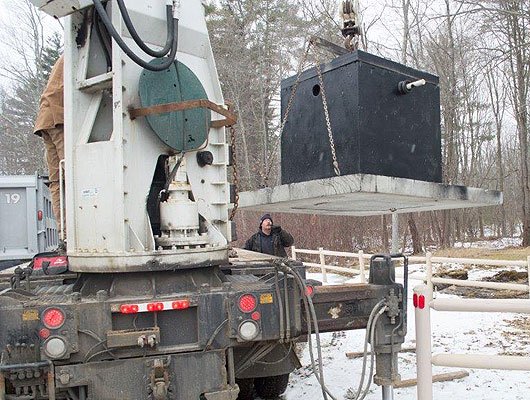 Siting the Norweco System for Installation

As it was sited in the Darby’s side yard, the entire Norweco Singulair tank was designed for installation within the water table. Anti-floatation weights and cables were specified, to eliminate the possibility of the tank rising out of its intended location.

The system’s 4-ft by 4-ft pump chamber was specified for installation between the Norweco tank and its leachfield, or effluent disposal area (EDA). The pump chamber, which was also designed completely in the water table, was custom-cast by the area’s licensed Norweco manufacturer and distributor, A.J. Foss, Inc. of Farmington NH, to include a 6-inch thick concrete ring protruding 16 inches around its base to prevent floatation. 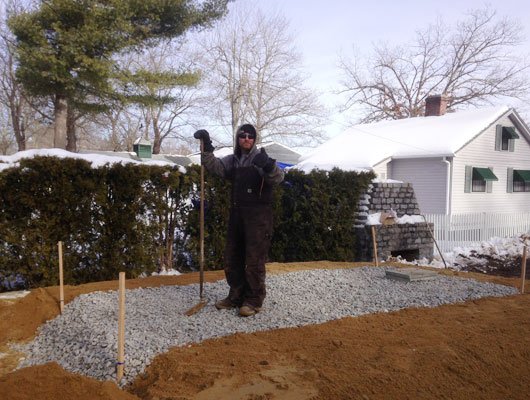 Since traditional septic systems require a large leachfield that can span 20 x 20 feet or more, they are not feasible for small waterfront properties. The Norweco Singulair, however, required only a 7-ft by 15-ft stone and pipe leachfield, tucked into the corner of the lot and placed vertically 2.5’ above the seasonal high water table, leaving the finished grade above the leachfield an aesthetically-pleasing 3.2± feet above the original grade.

Requesting Waivers
The septic system designer requested several waivers for siting the septic tank and stone and pipe leachfield/EDA in the property’s small waterfront footprint. Diligent coordination and open communication with town and state officials enabled the project to continue without interruption.

Within two days of submission, the design received local approval from the Town of Hampstead’s Code Enforcement Officer. He explained to the designer that he was satisfied with the plans, and agreed that the proposed system would be a valuable improvement to the property. Shortly thereafter, the NH DES granted their approval, and the designer began to elicit installation bids on behalf of the Darbys. 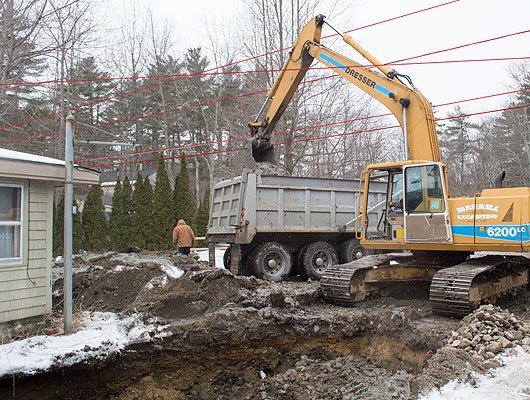 Due to the several key installation challenges cited below, several contractors passed on bidding this project because of uncertainty that they could install the septic system safely without undermining the existing cottage. In late December 2014, G.E. Merrill & Son Excavating, Inc. stepped up to the challenge.

The Darby’s small lakefront lot posed quite an excavation challenge, considering the various obstacles including the cottage, fencing, hedge rows, stone fireplace, and overhead utility lines that impacted the maneuverability of the moderate-sized excavator required for installing the Norweco Singulair tank. 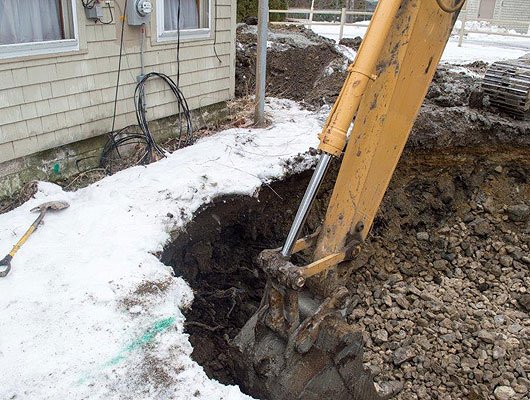 A high water table, in conjunction with the liveliness of the onsite gravel, made it extremely challenging to excavate such a large hole in such a small space. Stone has been added to the material at this point, in an effort to help stabilize it.

Proximity of Excavation to the Cottage

As pictured, excavation took place in very close proximity to the cottage.  The edge of the hole was within two feet of the concrete blocks that support the cottage, as well as the opposing stone fireplace (just out of view). Of great concern was the potential undermining of the hole, due to gravel giving way under the weight of these structures – which proved to be a non-issue. 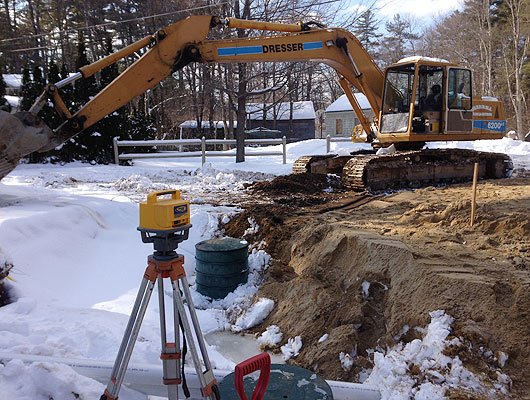 Installation was done during the winter to reduce the complication of the high water table, and to take advantage of peak drawdown of the lake. Had construction taken place in the spring, the lake would have been a full four feet higher, making the water table much more of a challenge. A further complication was the unprecedented, repeated snowfall that covered the entire site every two to three days that necessitated clearing before work could resume.

Utility lines that once ran to the cottage’s galvanized mast pictured in the photo were disconnected from the pole by their respective utility providers prior to construction. However, the lot was crisscrossed with several other lines (highlighted red in the photo), all without easement and many running directly over the cottage. Several attempts were made to have the utility providers re-route the lines so they didn’t run directly over the cottage, which resulted in moving all but the cable lines. However, all of the relocated lines were then positioned directly over the work area. After two months of phone calls to the utilities, with the winter window of opportunity closing, the excavator proceeded to work meticulously around the overhead lines, to safely install the septic system. 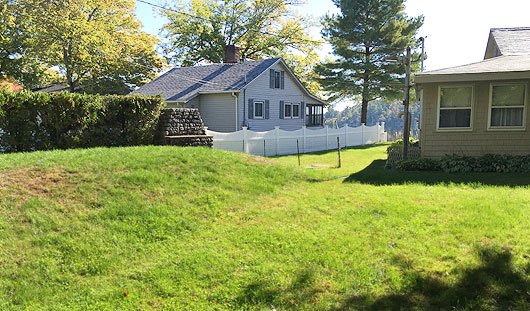 Despite its many challenges, the project successfully passed inspection by the NH DEP. This success story illustrates how thoughtful, well-planned septic system design and installation, coupled with the system advantages and overall value of the Norweco Singulair, led to a long-term solution for the Darby family, and any future owners of the desirable lakefront property.