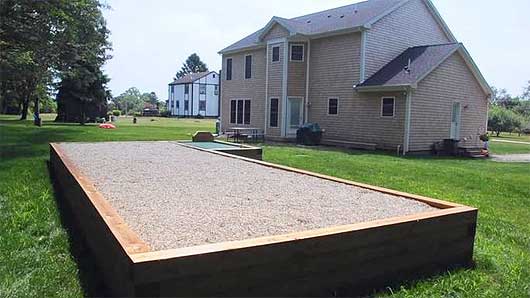 According to the Vermont Department of Environmental Conservation (DEC), wetlands in Vermont comprise over 230,000 acres, or 4% of the state’s land area. {source}

Wetlands and areas adjacent to them present unique challenges to property owners and septic system designers, since they are often highly-regulated, and their soil composition makes them unsuitable for traditional septic system installation.

According to the DEC website page, Jurisdictional Wetlands and Permitting, “Wetlands in Vermont are classified as Class I, II, or III based on the significance of the functions and values they provide. Class I and Class II wetlands provide significant functions and values and are protected by the Vermont Wetland Rules. *3 Any activity within a Class I or II wetland or buffer zone which is not exempt or considered an 'allowed use' under the Vermont Wetland Rules requires a permit.”

For more than 20 years, Craig Chase and his team have successfully designed alternative septic systems using the Norweco Singulair® system with advance pretreatment and effluent processing. This system enables property owners to install septic systems in locations that cannot support the large leach fields required by traditional septic systems that do not pretreat wastewater, so it must settle out in the field.

Craig explains, “Norweco is like a miniature sewage treatment plant in a box; it cleans the effluent before discharging it to the environment.” Craig first heard of the Norweco pretreatment system in 1995, while working as a draftsman for a Professional Engineer. “I’ve kept track of that system, and 20 years later, it’s still going strong. Even today, Norweco units are still comparable or less expensive than other alternatives.” In his experience, Craig notes, “Since none of the systems that I have designed using the Norweco Singulair have ever resulted in even so much as a phone call from a client, I have to conclude that they are as durable as they are affordable.”

Below, we briefly explore the challenges that the Chase team faced throughout their design of alternative septic systems for two Vermont properties – one in East Montpelier, and one in Sheffield.

An East Montpelier, Vermont landowner purchased a 7-acre parcel that was bisected by a large Class 2 wetland area. The goal was to successfully site and install a septic system before residential construction could take place.

Selecting a Site for the Sewage Disposal Area

Side one of the wetland-divided parcel contained a large area that had been filled as part of a nearby road project. This side’s road-access made it the most appropriate side to site the house, but the fill was up to 20 feet deep, making it unsuitable for sewage disposal.

Side two of the parcel contained native upland soils, initially making it appear suitable for a conventional mounded sewage disposal system. A mounded system, however, would require more than 100 cubic yards of mound sand, necessitating that a driveway be built across the wetland.

To avoid the conventional septic system’s necessity to build a driveway through the Class 2 wetland to bring mounding sand to side two’s upland area, an alternative, non-conventional approach was chosen.

The Norweco Singulair, featuring effluent-pretreatment and smaller final sewage disposal area/leach field, enabled the design of a final disposal system across the wetland, eliminating the need to install 100+ cubic yards of mound sand.

Design and Location of the Final Effluent Disposal Area (EDA)

For this project, a stone at-grade bed was designed for the final disposal area, as an alternative to a conventional mounded system. This solution allowed for a force main* to be installed across the wetland, and for the stone aggregate to be brought to the site via bucket loader over the existing wetland disturbance caused by the force main installation.

*A force main is a pressurized main pipe through which water is pumped, as opposed to flowing by gravity. 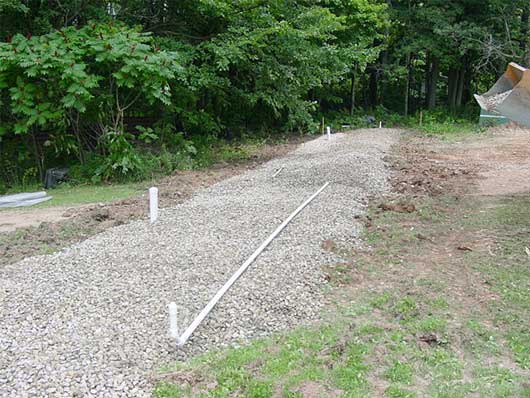 Exploring Other Options for the Final Disposal Area

Other discussed options for constructing the final effluent disposal area (EDA) included directional boring of the force main and infiltrator chambers, instead of using stone aggregate. It was decided that since the wetland would already need to be disturbed to get an excavator to the upland area for construction of the final disposal area, it was more cost-effective to design and permit the stone at-grade bed. A wetland permit was obtained before crossing the wetland with the excavator.

The Wastewater and Potable Water Supply Division of the Vermont Agency of Natural Resources permitted the system as a fully-compliant system.

For this project, Norweco-Certified manufacturer and distributer A.J. Foss of Farmington, NH supplied the Norweco Singulair 960-500 system, because according to Craig Chase, “Jon Cardinal of A.J. Foss was the most responsive and least expensive vendor we spoke with, and he and his team’s professionalism has continued throughout every project we’ve done.”

Despite the challenges of installing a wastewater treatment system in a Class 2 wetland area, this project proceeded successfully. The alternative septic system’s design and installation, coupled with the features and value of the Norweco Singulair, achieved the landowner’s goals, and enabled them to proceed with building a residence on the property.

A Sheffield, Vermont homeowner was faced with the challenge of replacing a failed wastewater system (septic system and leach field) in problematic soil conditions. The home was situated on a 9-acre parcel, but approximately 90 percent of the landscape was wetland, and significantly burdened by dense, heavy silt-laden soils unsuitable for septic system installation. The goal of this project was to successfully situate and install a new septic system for this property.

Selecting a Site for the Sewage Disposal Area

The only area that was high and dry enough for constructing a final effluent disposal system to a fill area was the home’s small back yard, which consisted mostly of fill soils. A traditional septic system, with its required mounding sand requirements, would have encompassed essentially the entire back yard, starting just outside the back door, so an alternative system was needed.

Septic system designer Craig Chase discussed the situation with the Regional Engineer of the Vermont Agency of Natural Resources Division of Ground Water and Potable Water Supply. It was decided that since this project involved: 1) an existing residence that had a potable water supply (from a drilled well in the front yard), and 2) an existing wastewater system, Vermont State rules allowed for the design of a “best fix” solution. Best fix is the state’s term for what is allowed when a fully complying system, (such as a mound system that meets isolation requirements to seasonal high groundwater) cannot be constructed, or when the cost of constructing a fully-compliant system is far greater than the protection that would be accomplished by strict adherence to the rules.

As detailed in the Septic System Primer published by the Vermont Department of Environmental Conservation’s Lakes and Ponds Section, "any work done on a septic system will require its upgrade to meet state standards, however, when working on an existing system, owners are entitled to a 'best fix' permit to deal with difficult locations." (source)

The septic system designer’s proposed best fix solution was to design a system using Norweco Singulair with pretreatment unit, with a bottomless sand filter (BSF) as the final effluent disposal field. This solution would be aesthetically pleasing, cost-effective, and encompass only about 20% of the backyard. As of this writing, the homeowner has been provided with a choice of three variations of what the BSF can look like. Once the BSF style is selected, the septic system design will be finalized, permitted, installed, and inspected by a certified designer.

Owner Jon Cardinal explains the two key factors that differentiate his firm’s Norweco offerings from most suppliers in Vermont.

He notes, "The first key difference is that they typically carry the system that only handles up to 600 gallons per day (GPD), called the Norweco Green Singulair. Here at A.J. Foss, we manufacture tanks that can handle 750, 1,000, 1250, and 1,500 GPD. In most situations, we can go up to 4,500 GPD by doing a parallel design. Also, our tanks are concrete, and manufactured to Norweco specifications at our facility in Farmington, NH, while the Vermont suppliers offer plastic tanks that they purchase from Norweco."

"The second key difference," Jon explains, "is that our A.J. Foss team can manufacture tanks with H-15 loading capabilities, which is important for projects where the tank is located in an area that must be driven over by vehicles as large such as propane trucks, oil trucks, septic pumpers, etc. The H-15 loading option is not available with plastic tanks."